leg 21 finished in Argeles sur Mer with a lovely dinner and in the morning we had a great breakfast and like pseudo-athletes we ate as many scrambled eggs as we posssibly could to prepare ourselves for the mountains. 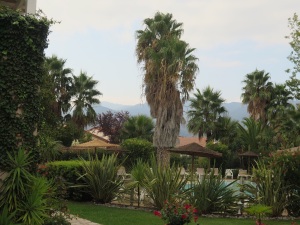 The first steep uphills were not far away and up we went and after that down until we reached the sea again in the gorgeous Collioure. After a short break dedicated to photos (Claudia) and navigation checks (Olli) we continued in the best of moods. The stretch we had just completed would have been one which I would not have been able to do only four weeks ago without pushing the bike. Now we both happily roamed across the hills. 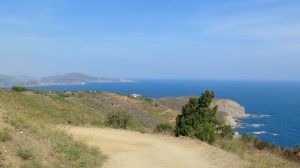 And so it went on all day: Up and down in an impressively steep manner. The landscape was spectacular and I really did not expect to hear myself saying that: It was an unbelievably beautiful bicycle day! On one of the highest points of our journey we entered Spain. After some 1700 kilometers cycling from Bonn.

To reach Llança, our destination for the day there were another 20 kilometers of hills to do, but we were over the moon what a wonderful day we were experiencing! If anyone ever visits Llança please do not forget to go to the restaurant Fornall Mari. It is an excellent little place with caring and knowledgeable service and brilliant food – a real highlight.

From Llança we started stage 23 to Palamos – overrall a rather flat stage compared to the day before. Well… it started actually with a last steep climb of which ended the Pyrenees for us. Then there was flatness…! In Castello Empuria we had a brief stop to admire the mediaval village centre and the church before we continued our journey. Our route joined the Pirinexus ever so often which runs through the Pyrenees away from cars and other traffic. Whenever we met it though the route was in really bad condition and it became our hobby to actually try to avoid this bikeroute which has been awarded the bicycle route of the year 2014! 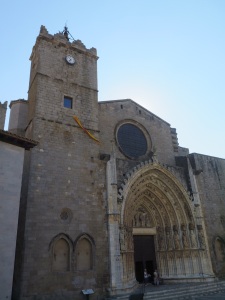 With Palamos we eventually reached that part of Costa Brava where mass-tourism feels at home. Looking from the positive side on it mass-tourism means that you easily find a place to stay in off-season and restaurants are prepared to feed you at times no local would ever think about eating (in Spain: between 5 and 7 pm … at that time we are just freshly showered and a bit rested and REALLY hungry…). Therefore… no complaints – it all has its own advantages!

Palamos was the starting point for our leg 24 and there we went further south and approached the second hill-stage. While Olli seemed to hardly sweat I had a hard time on this leg. We had to do more breaks to get over the Costa Brava hills – and yes… there is a very good reason to call it Costa Brava. It is a very wild coast! We met a Swiss lady on her bike tour as well – Maja. She has just become a pensionist and decided to take on her bike and cycle to Malaga from Zürich. Impressive. Despite of tired legs it was a great day again – over and over we were rewarded with excellent vistas after a climb. The stretch between Sant Feliu de Grixols and Tossa de Mar is known as well as the “Road of the Year”: 365 curves each presenting impressive vistas! Today`s destination is Blanes and tomorrow it will be Barcelona! 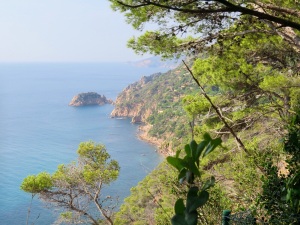 Vista from “Road of the year” – Costa Brava

Dig it up! Blog Archive